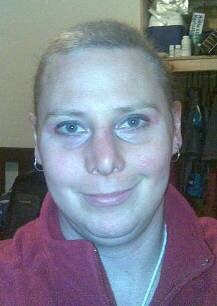 First week out of hospital

All in all it was a bit of a haze, but once those words were said, you have cancer, then I sort of blanked out a bit after that. It was like every thought was going through my head at the same time, and at such a fast rate, all that I heard was a buzz.

I was put onto experimental treatment involving arsenic, as well as the usual chemo. 95% of people who got the leukaemia that I had die. On my side was that most of the people who got it were well into their 60’s and beyond, and I was 32, and pretty fit. I had a good chance of fighting it if they hit it hard.

Fighting it certainly was a new experience for me. I had had to fight for things in my life before, but not like this. This wasn’t a battle I had a say in, I was simply the battlefield in which the war was being waged, and each side had their tricks. Long story short, after six months of in hospital treatment, I was released to start the next stage of my treatment. But like the season before my eyes, I was changed.

It was at this point a new battle started to take place, survivor guilt.

When I first found out I had cancer, the question “why me?” rang through my ears. I looked after myself, never drank, never smoked, never did drugs, yet I was the one who copped the Big C. It wasn’t so much about “it isn’t fair”, because life isn’t fair. It was about the odds of it happening, and I had done all the right things to make sure it didn’t happen, and it didn’t work.

When I walked out of the hospital after missing autumn and winter of that year, there was still the “why me?” question, but this time the question was why did I survive, when others don’t?

Survivor’s guilt is a weird thing, it really messes with your head. Every time you hear of someone being diagnosed. Every time you hear of someone losing their battle, you wonder why you made it through. Every time you see someone getting a sausage sizzle, or raffle in their name to help them with their battle, you wonder why others didn’t do the same for you, and so why should you donate to help them. After all, it’s all all a lot easier these days. The medications are better, there’s been a lot more research, and making a donation to help someone is just a mouse click away. You’ve already done your bit to beat this, why would you want to relive it all again?

Then you look at it from the perspective of those who didn’t beat it. In a way, they were the lucky ones. They didn’t have to try and rebuild their life after it. They didn’t have to go through more and more years of testing. The didn’t have to worry that every time they got a cold, that this could be the day remission ends and you’re back to fighting that battle. Would you fight it? Could you really be stuffed going through it all again? I’ve thought about it, and I really don’t think I could be bothered with it. It’s not a want to die, it’s a realisation that life has been pretty shit since it happened, and there really isn’t a point to going through it all again. That’s survivor’s guilt.

I really don’t think people understand it, and I really don’t think I’ve put it in the right words, or done it justice in trying to explain it here. It’s a form of Post Traumatic Stress Disorder. I can’t watch a bone marrow biopsy being done on televisions shows. I cringe when I see someone wearing a bandanna to cover up their loss of hair. I wonder every time that I get sick if this is it. I wonder what the point is in looking after myself at all, because it will most likely come back at some point, so what’s the use? I kick myself for having these thoughts at all, because I’ll just be viewed as a Negative Nelly, who should be enjoying the fact I got a second chance at life. This is a no win situation, because I can’t celebrate beating cancer, because I didn’t beat it, I simply managed to slip away from it when it grabbed me by the short and curlies. Like the tattoo on my back of the leukaemia cell represents, it is behind me, but it will always be a part of me. It’s a guilt from which I can’t escape. The latest research on leukaemia is that if it is below 1 part in a million, then the body can manage it. Above that, it’s treatment or you’re stuffed. 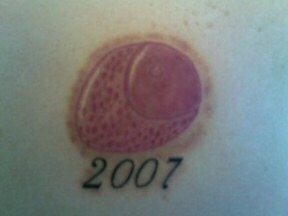